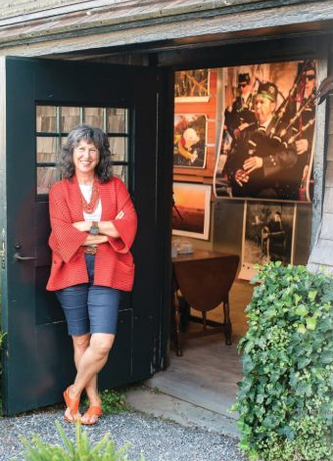 Photograph of E.A. Kahane by Sara Cooney, courtesy of Newport Neighbors Magazine, 2020
Photography has been E.A. Kahane’s passion from childhood.  The camera has provided her a continuing opportunity to portray, interpret and share her world.  Kahane's body of work is varied, ranging from landscape to portraits. While her themes may change, the joy, excitement and drama she captures and projects, does not. This has resulted in several bodies of work that include, "I LOVE A PARADE!" an archive celebrating parades.
Process for Kahane has always been a part of her photographic expression.  In her most recent exhibit she chooses to present her images through an installation intended to create an experience. She transports the viewer through intimate and holistic contact with the photographs using light, video, sound and even texture.  The exhibition showcased her newly designed light tower, light boxes, photo-based furniture, dimensional printing, custom wallpaper, murals and silk screens.  She works with a variety of materials and displays the images in such a way that compels viewers to move beyond a four-sided, two-dimensional photograph.  After many years of making pictures, she is exploring the use of those images in unusual and unique ways designed to enhance the viewer experience. Currently, she is represented by Jessica Hagen Fine Art in Newport, RI.  ​
Biography:

Elizabeth Ann Kahane is a fine art photographer who was born in New York and currently divides her time between Manhattan and Newport, Rhode Island.  She is mostly self-taught and began taking photographs almost as early as she could hold a camera.  Having studied with Jay Maisel in New York in 2011, and Arthur Meyerson in Santa Fe in 2013, Kahane also studied art of printing black and white film at the International Center for Photography, in 1998 and 2010, respectively. Photography has served as a dynamic part of her artistic expression and passion for the subjects and locations is paramount.  In 2011 she established her studio, Photos by E. A. Kahane. In 2015 she participated in a photographic work shop with JDC Israel and a similar work shop with JDC Morocco in 2017. Additionally, Ms. Kahane is passionate about fashion, performance art, traveling around the world, collecting art with an emphasis on photography, as well as classic car collecting and boating.